I recently had the pleasure and great fun to be interviewed by Gemma from the retro and current video games review site, Juicy Game Reviews.

A chance post that I made on Twitter got us chatting about the Nintendo 64, or the N64 game Uniracers, also known as Unirally in PAL territories. Although I never worked on this title myself, I was at DMA Design when all the drama surrounding the game with Pixar was going on. It was a shame that the lawsuit resulted in it getting pulled from the shelves as it's a great game.


Anyway, we chatted briefly about my early days in video games when I worked on DMA Design titles such as Body Harvest for the N64, a little bit on GTA, and Zenith. The first game that I worked on at DMA was Zenith for the N64 and it's one of the titles that got pulled from production.


It was a damn shame as it was shaping up to be a really exciting game, and I have no doubt that Zenith would have been a great N64 game. But I won't spoil what we chatted about here. It's more fun to read about it on the interview. Gemma is really cool and I had great fun with her questions.


I also got the chance to chat about some of my work outside of games in the acting and film-making industry.

It was fun remembering back to those early days in video games.

A Bottle And A Friend

It's Burn's Day once again. So enjoy life with good company because you never know when it may end.

A Bottle And A Friend

Here's a bottle and an honest friend!
What wad ye wish for mair, man?
Wha kens, before his life may end,
What his share may be o' care, man?

Then catch the moments as they fly,
And use them as ye ought, man:
Believe me, happiness is shy,
And comes not aye when sought, man.
Posted by Paul A Reeves at 06:14 No comments:

Since the earliest news of The Force Awakens started hitting the world wide web, I've been having some fun creating a handful of cheeky images. I have nothing but the deepest respect for everyone who has worked to create any of the episodes in the George Lucas space opera, so none of my new or manipulated images are meant for anything other than having fun and enjoying Star Wars.

See my blog on BB-8 here


NASA Mars photos finding lumps of rocks that look like monster crabs prompted me to make this image.


When The Force Awakens trailers came out, I had a great time with those. Yeah the first one is a bit crude but I'm a nice guy... honest.

I made this image before seeing The Force Awakens and finding out that Finn works in sanitation. There's a lot of Stormtroopers on the StarKiller base, and that's a whole lot of poop to deal with. I think this is why Finn really wanted out of the First Order.

This next subject is really close to my heart. Who will be the next Han Solo. I made this header image for my blog on why I believe the very fine actor Anthony Ingruber should be the first to step in Mr Ford's space boots.

On a much more sombre note, I created this next image in response to the tragic Paris shooting at Charlie Hebdo. This is what actually prompted me to start blogging again.

Returning to more Star Wars silliness, I thought that Kylo Ren was a pretty cool, dark character, and he looked like he could fit right into a slasher horror movie. So I took an existing illustration of Kylo Ren and gave him a Scream makeover. The fantastic original illustration is not mine, I just slapped a Scream mask on him.

And I'll end with just some plain old shenanigans.

Prequels, sequels, and remakes, just mentioning them will have many curling up into a ball, rocking back and forth trying to find their happy place. But some of the greatest movies ever made have been prequels, sequels and remakes. A Fistful Of Dollars, The Magnificent Seven, Scarface, The Thing, The Departed, Invasion Of The Body Snatchers - 1978, Zulu Dawn, The Empire Strikes Back, Internal Affairs II and The Godfather II achieves the remarkable feat of being both a sequel and a prequel in glorious fashion. The only problem I have with any prequel, sequel, or remake is if they are bad movies. Volumes could be written on what makes a movie bad, but one of the biggest make or break elements is the casting. Get the casting wrong and things are on a rocky road to hell right from the start. But get the casting right then you've got something remarkable on your hands and it seldom gets any better than Harrison Ford playing one of my absolute favourite movie heroes, Han Solo.

I can't wait to see The Force Awakens and the two following movies that will continue the story with a new trilogy in George Lucas's space opera. But what about the other movies that Disney has in store? What about all the adventures all the characters had before everything in the galaxy went all dark side? The adventures of Han Solo could create a series of movies as enduring as the Bond movies. His DL-44 Blaster pistol is his Walther PPK, The Millennium Falcon is his gadget rigged Aston Martin, and even if he doesn't do it all for Queen and country on account of him being a bit of a scoundrel, he still wins the favour of a princess. But what about that crucial element of casting a new actor to play a younger Han Solo? Get it wrong and there will quite literally be riots on the streets.

A few names are being thrown around who the successor to Mr Ford could be. Some I like the sound of and some I don't. Aaron Paul is a fantastic actor and he would make an admirable Han Solo, even if some part of me would be waiting for him to say, "Yeah! Deathstar BITCH!" Chris Pratt I am in two minds about. He could pull it off up to a point, but he would have to get rid of the Marvel makeover jacked look. Having an actor who is as beefed up as that would just look terrible as Han Solo or Indiana Jones for that matter. While I take my Fedora off to actors who get their bodies into such great shape, it would just look weird and out of place in a period movie playing Indiana Jones or playing Han Solo who is by all accounts just a regular type of guy rather than a superhero type. Harrison Ford had the perfect degree of athleticism to make Han Solo and Indiana Jones believable ass-kickers. So please casting gods, no actors with Marvel jacked makeovers for these roles.

Being an actor myself I would love to be in one of the Star Wars movies, and yes a part of me would love to play Han Solo, but more than anything I want the casting to be as close to perfect as possible. That's why I reckon the first new actor to step into Mr Ford's shoes should be Anthony Ingruber. Anthony plays a young version of Harrison Ford in the movie The Age Of Adaline, and he looks incredibly like a Younger version of Mr Ford.

I first heard of Anthony on my friend Casey Ryan's very popular podcast show, The Cutting Room Floor where Anthony did this killer impersonation of Harrison Ford.
Now if the right decisions are made and Anthony becomes the new owner of the Millennium falcon, as awesome a job of impersonating Mr Ford as he can do, I don't think he should do a simple impersonation. I would be very surprised if that was expected of him or from whoever ends up in the role. What Anthony's performance in The Age Of Adaline and being able to do such mind-bogglingly accurate impersonations proves, is that he has the acting chops to pull this off.

The Age Of Adaline trailer

Like every actor who has played James Bond, he should bring his own brand of scoundrel to the role. Anthony is the perfect choice to be the first new Han Solo. Maybe I can play Han Solo's old smuggler friend Mako Spince and tear around the galaxy on smuggling adventures together. That would be awesome.

While NASA has us freaking out over these images of giant crab monsters on Mars, we are being distracted away from the bigger picture. 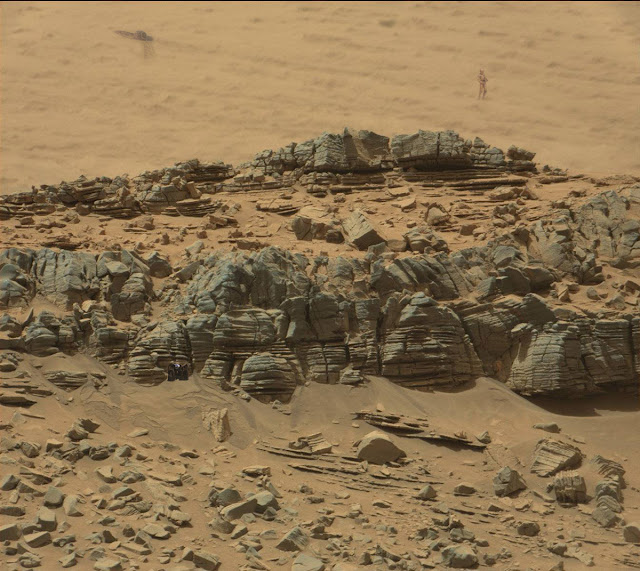 While we are being pointed towards that crab like looking rock, and lets be honest, it's most likely just a rock, I want to know what is going on at the other side. 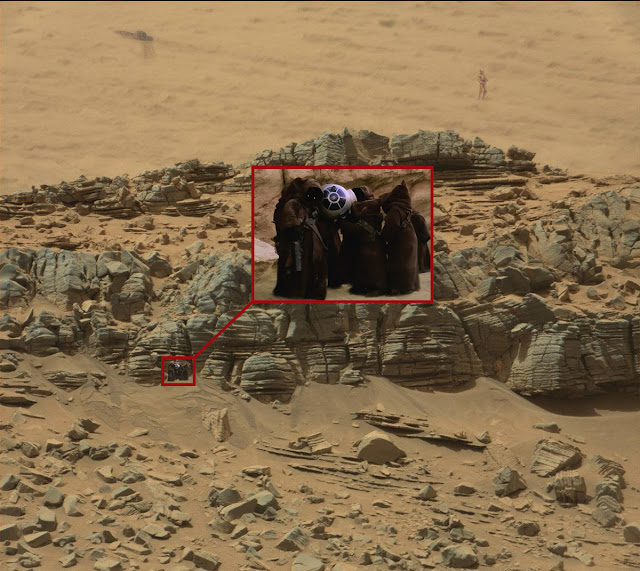 There is definitely some weird shit happening on Mars.
Posted by Paul A Reeves at 10:04 2 comments:

Paul A Reeves
United Kingdom
I'm an artist, actor, writer, and now moving into filmmaking. I've worked in the video games industry as a 2d/3d artist and animator for several different games companies including DMA Design AKA Rockstar North, Gremlin, Nintendo, Codemasters, Steelmonkeys, and Extra Mile Studios. I'm venturing into film making and writing my own material. I'll add news about my projects as I progress with them.

My Artwork On Red Bubble 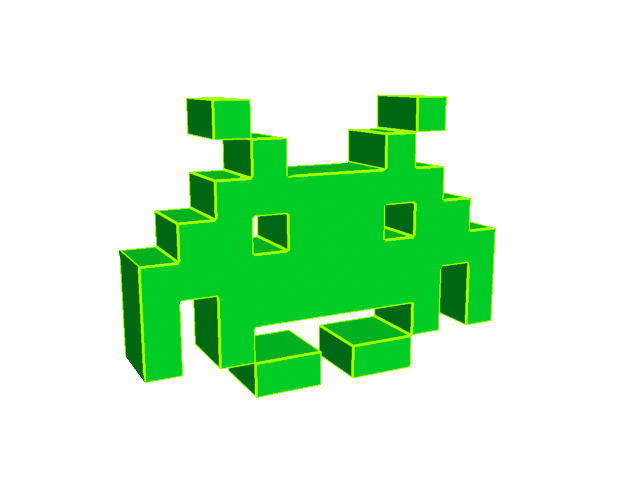